You might wonder why there is so high number of phpMyAdmin security announcements this year. This situations has two main reasons and I will comment a bit on those.

First of all we've got quite a lot of attention of people doing security reviews this year. It has all started with Mozilla SOS Fund funded audit. It has discovered few minor issues which were fixed in the 4.6.2 release. However this was really just the beginning of the story and the announcement has attracted quite some attention to us. In upcoming weeks the security@phpmyadmin.net mailbox was full of reports and we really struggled to handle such amount. Handling that amount actually lead to creating more formalized approach to handling them as we clearly were no longer able to deal with them based on email only. Anyway most work here was done by Emanuel Bronshtein, who is really looking at every piece of our code and giving useful tips to harden our code base and infrastructure.

Second thing which got changed is that we release security announcements for security hardening even when there might not be any practical attack possible. Typical example here might be PMASA-2016-61, where using hash_equals is definitely safer, but even if the timing attack would be doable here, the practical result of figuring out admin configured allow/deny rules is usually not critical. Many of the issues also cover quite rare setups (or server misconfigurations, which we've silently fixed in past) like PMASA-2016-54 being possibly caused by server executing shell scripts shipped together with phpMyAdmin.

Overall phpMyAdmin indeed got safer this year. I don't think that there was any bug that would be really critical, on the other side we've made quite a lot of hardenings and we use current best practices when dealing with sensitive data. On the other side, I'm pretty sure our code was not in worse shape than any similarly sized projects with 18 years of history, we just become more visible thanks to security audit and people looked deeper into our code base.

Besides security announcements this all lead to generic hardening of our code and infrastructure, what might be not that visible, but are important as well:

Last week was mostly focused on our libraries. I got merged several patches to our SQL parser from Deven and I've spent quite some time on ShapeFile library, which got several improvements.

It all started with one issue being reported and it actually pushed me to fix older issue - lack of tests. Few commits later the coverage went up to 92% and several bugs were fixed on the way, as some parts of the code were simply broken and nobody has used them so far.

Hosted Weblate provides also free hosting for free software projects. I'm quite slow in processing the hosting requests, but when I do that, I process them in a batch and add several projects at once.

This time, the newly hosted projects include:

If you want to support this effort, please donate to Weblate, especially recurring donations are welcome to make this service alive. You can do them on Liberapay or Bountysource.

Since today all Git repositories from Hosted Weblate are exported over https. The previous git URLs will continue to work for some time. The exact depreciation schedule is not yet decided as this URL might be included in various scripts and there is nothing pushing us to disable the service.

Another important change is for private repositories, this now requires authentication using API key. You can specify it on the clone URL (git clone https://user:key@hosted.weblate.org/git/weblate/website/) or use gitcredentials to store it separately. The API key can be obtained from your user profile API page (once you're authenticated to Weblate).

After week of silence (and sickness) I again did some work on phpMyAdmin. Again it was mostly focused on cleaning up piled issues and pull requests and it worked quite well.

Several of them needed minor changes before they can be safely merged and they were waiting for these for several weeks. In the end I've processed most of them and merged them with needed cleanups or polishing.

Slightly behind schedule (it should have been released in October), Weblate 2.9 is out today. This release brings Subversion support or improved zen mode.

If you are upgrading from older version, please follow our upgrading instructions.

You can find more information about Weblate on https://weblate.org, the code is hosted on Github. If you are curious how it looks, you can try it out on demo server. You can login there with demo account using demo password or register your own user. Weblate is also being used on https://hosted.weblate.org/ as official translating service for phpMyAdmin, OsmAnd, Aptoide, FreedomBox, Weblate itself and many other projects.

Should you be looking for hosting of translations for your project, I'm happy to host them for you or help with setting it up on your infrastructure.

Further development of Weblate would not be possible without people providing donations, thanks to everybody who have helped so far! The roadmap for next release is just being prepared, you can influence this by expressing support for individual issues either by comments or by providing bounty for them.

Last week was a bit calmer and was really focused mostly on the bug screening and merging pull requests than on actual work. I've however managed to release new version of SQL parser with several fixes contributed by Deven.

Today, new version has been deployed on Hosted Weblate. It brings many long requested features and enhancements.

Adding project to watched got way simpler, you can now do it on the project page using watch button: 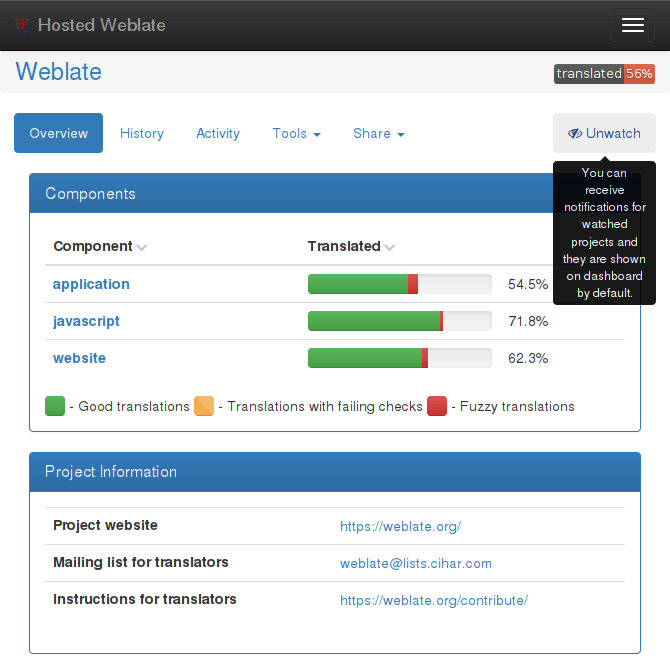 Another feature which will be liked by project admins is that they can now change project metadata without contacting me. This works for both project and component level: 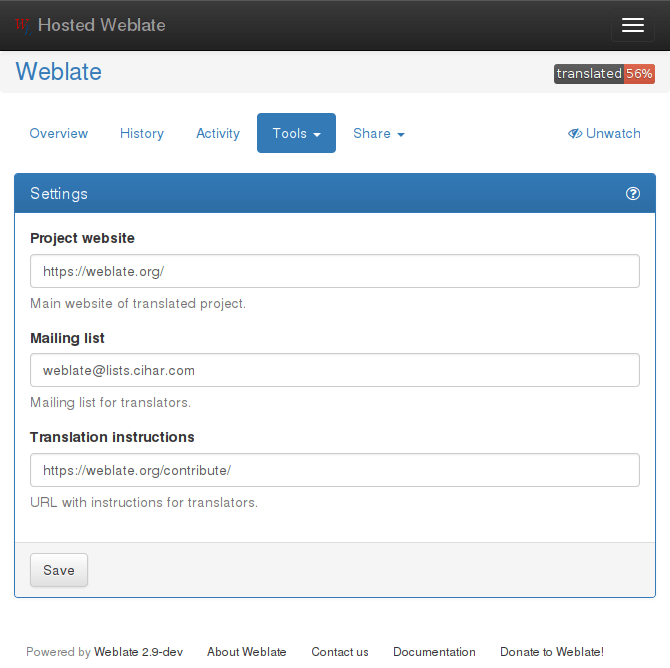 And adding some fancy things, there is new badge showing status of translations into all languages. This is how it looks for Weblate itself:

As you can see it can get pretty big for projects with many translations, but you get complete picture of the translation status in it.

You can find all these features in upcoming Weblate 2.9 which should be released next week. Complete list of changes in Weblate 2.9 is described in our documentation.

Last week got again more focus on bug fixing. Mostly those were again hardenings on our infrastructure and Docker image, but there were some fixes as well. Overall the phpMyAdmin docker image got much better and it will be be even better with upcoming 4.6.5 release which adds some improvements to the main codebase.

Yesterday Gammu 1.37.90 has been released. This release brings quite a lot of changes and it's for testing purposes. Hopefully stable 1.38.0 will follow soon as soon as I won't get negative feedback on the changes.

Besides code changes, there is one news for Windows users - there is Windows binary coming with the release. This was possible to automate thanks to AppVeyor, who does provide CI service where you can download built artifacts. Without this, I'd not be able to do make this as I don't have single Windows computer :-).

Would you like to see more features in Gammu? You an support further Gammu development at Bountysource salt or by direct donation.